WE WOULD LIKE TO OFFER YOU A DISCOUNT
Provide us your e-mail and we will send a promo-code to your inbox
GREAT!

You'll definitely like the discount
Check your inbox or

USE IT RIGHT NOW

Learn How to Use Punctuation and Quotation Marks Like a Pro 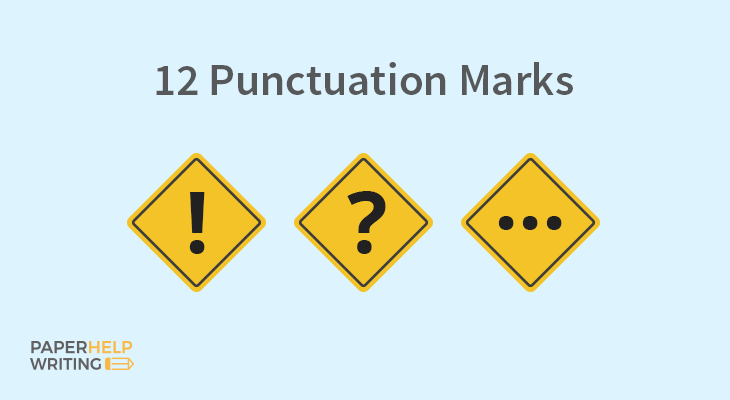 Punctuation is the primary method of differentiating between various fragments of the text and make the reading process easier and more informative. Some punctuation marks are used intuitively, while others are often misused and need to be studied. We have created a complete guide to teach you the basics of using 12 most common punctuation marks.

The scientific definition of punctuation is a collection of symbols that can clarify the meaning behind the phrases and sentences, separate their different parts, and highlight the meaning of the words and word constructions. When used correctly, punctuation marks can enrich your writing and make it complete and legible. There are 12 most common punctuation marks used in the English language, and here are the tips on using each one of them.

The full stop is among the most widely employed punctuation marks in English and is actually one of the marks that are employed intuitively. A full stop is not used to highlight the meaning or elevate the style of the text; its sole purpose is to signal the completion of the sentence.

The role of the exclamation mark is a stylistic one: it is a tool that is used for conveying emotions like excitement, as well as point to the urgency or dramatic character of the sentence. Using an exclamation mark when necessary is a sure-fire way to make your text more attention-grabbing.

Comma is one of the most diverse punctuation marks with several important purposes. The most common use of the comma is to separate different elements of the sentence like adjectives or items of a list. When there is a need to create a logical pause between two parts of the sentence, a comma should also be used. Another instance where the comma is widely used is when you’re writing down the date or want to separate the name of the city from the name of the country.

There are several instances where a semicolon proves to be indispensable in a text. The first one is when you want to omit conjunction from a long sentence to improve its readability. Another reason to use a semicolon is when you have two related short sentences that you want to combine into a single phrase. One more acceptable use of the semicolon is to separate the items on a list.

The colon punctuation mark usually precedes a list of items. When you are writing a sentence with two independent clauses, where the second clause illustrates the first one, also use a colon. Sometimes colons are used interchangeably with the em dash to signal the end of the sentence.

Hyphen is most commonly used in compound words, or words that consist of two or more words that represent a separate idea. However, not all compound words are written with a hyphen; some of them can open or closed compound words. Another common case that calls for the use of hyphen is numbers written as words.

It’s very important to differentiate between the hyphen and the en dash. The most common use of an en dash is a range of numbers, distance, or relationships. The first two instances are rather clear, but the third one is rather complex. The range of relationships that can be introduced by an en dash includes connection, conflict, and distance.

The em dash is one of the most widespread punctuation marks in professional writing. Depending on the context, the em dash can be used instead of parenthesis, comma, or semicolon. The main purpose of the em dash is to make a stylistically grounded interruption in the text.

A single quotation mark is a less common punctuation mark that can be very useful in the following situations:

The only case where double quotation marks are used is to signal the presence of quotes. There are no other situations where the use of quotation marks is justified, whether it’s for emphasis or to highlight a title of a book or film.

Get in 3 hours only.

Format And Peculiarities Of A Research Paper Title Page

The way you begin your research paper is closely connected with its overall look, and of course, with the grade you will be given for it. To perform a high-quality and highly estimated paper, you are required to alloy several important components together into one piece of writing for it to have a finished and … END_OF_DOCUMENT_TOKEN_TO_BE_REPLACED

How to choose the best topic for proposal essay

A proposal essay is distinguished by its purpose. When you write this type of essay, you have to propose some ideas and then prove it. There are two most often variants: you want to convince your audience that you are right, or that someone else is wrong about something. You will need different types of … END_OF_DOCUMENT_TOKEN_TO_BE_REPLACED

Higher education in the United States is considered the best in the world. By the beginning of the new century, a highly effective education system, famous for its practical orientation, flexibility, and freedom of choice, was formed in the country. Universities in the United States of America are renowned for their high-quality teaching and the … END_OF_DOCUMENT_TOKEN_TO_BE_REPLACED